← more from
Freaksville Records
Get fresh music recommendations delivered to your inbox every Friday.
We've updated our Terms of Use. You can review the changes here.

by The Loved Drones 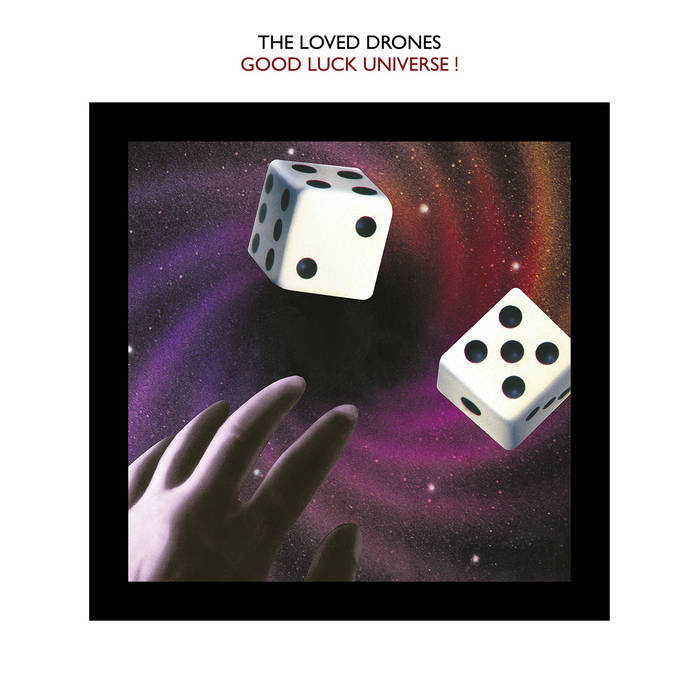 “It is the role of the eastern Belgian city of Liege to parody the North of England... a periodic northern England, it’s feet stretched and bent so its features are contorted and emphasised. It is through caricature that we see what faces and voices are really like, and the same goes for places.”
Jonathan Meades.

The Metta Bhavana - for those who don’t know it - is a meditation that predates Buddhism, used by Buddhists and non-Buddhists alike to psychically spread loving kindness around the globe. The world is in need of plenty of loving kindness right now, and another way to do that is through music, especially when insidious, killjoy forces are so dead against it. From tiny seeds mighty acorns grow, and the source of bonhomie can come from the unlikeliest of places.

Take The Loved Drones from the industrial steel mining town of Liège in Belgium for instance, a collective from the Freaksville stable who’ve created a mind-expanding suite of instrumental tracks built on meditative drones. Good Luck Universe takes in Krautrock, post-rock, electro and heavy rock, as well as more reflective sitar-strewn musical mantras to drift away to. It is a melange of meditative mayhem, skillfully mastered by Man From Uranus in Stamford Hill, London, who took three hours of music and managed to condense it into a more digestible 45 minutes (although with just six tracks, that still gives the listener plenty of time to wig-out without interruption).

The album was recorded in a now defunct industrial zone behind a high speed overpass in Liege. It’s a ghost town that conflates the psychogeography of somewhere like Halifax with the deserted streets of Detroit, and “it smells like coffee,” according to head honcho Benjamin Schoos, belched out every day by an enormous, ominous chimney hovering over the skyline. Liege is like some surrealist Magritte painting of the senses.

Be warned, opener ‘Nomad’ and follow up ‘Escape from the Killer Drone’, contain little of the idealism that the album concludes with. Instead we’re exposed to the muck and grind of industry, a fuliginous, alacritous, almost motornik intensity that there’s no room to escape from, while equally you could be gazing through the menacing fisheye of a drone as it hovers in an Afghani village looking for targets.

‘Drone Alone - Crimson Skies’ offers some respite from the hard times, and then the “loving kindness” begins to manifest with electric harps, sitars, and a deep binaural drone to really clear the senses. Good Luck Universe also takes its influences from around the globe, via the multicultural quartier the band’s label is headquartered in in the European capital.

“Our Freaksville HQ recently moved to Brussels,” says Schoos, “located in a very middle eastern, arabic area, next to the Syrian Embassy. It’s close to the South Station where you can catch Eurostar and the Thalys train to and from Paris and Amsterdam among other places, and the Portuguese and African quarters are nearby too. It’s in this melting pot where we composed the themes of the album with Pascal [Scalp, bass], Marc [Wathieu, guitar] and Simon [Rigot, sitar and hammond]. I think the sounds and smells and colours had a profound bearing on the music.”

In France the album will be released by Gonzaï, the much-loved cult Parisian label also responsible for the must-read monthly magazine of the same name. Output this year includes the lauded prog opus Pôle by Besombes and Rizet, originally available in the mid-70’s, as well as the much sought after vinyl for Marie et les Garçons’s eponymously-titled reissue from 1980.

Good Luck Universe is an album as diverse as its influences, and it’s also a record that manages the neat trick of telling a story with no words. It’s a narrative that over six amazing tracks releases you from the bondage of fear, and allows you to bathe in the deep, luxuriant loving kindness of ‘Canyons’ at the conclusion.

“Belgium does bleakness with a surprising brio that we’ve almost lost the knack for in England,” said Meades in his 1994 BBC documentary Belgium, and 21 years on that still appears to be the case. “Then there is the Belgium that makes you believe that Rene Magritte was actually a realist and not a surrealist - that he was a recorder of his country's condition, a reporter...”

Good Luck Universe is a tale of two cities (okay, a city and a town), a tale of two Belgiums, and an album that scrutinises the darkness and the light, the matter and the antimatter of the universe. Above all it is an album that offers some hope, and by god do we all need that right now. Altogether then: “may I be well, may I be happy…”

"Finding solace and hope in bleak times Good Luck Universe is mostly a motorik driven ride through the past. Countless influences can be found liberally scattered throughout, from the Kosmiche to the post rock and industrial drone progenitors of the last forty odd years. However, with a certain unique Belgian bent and take on it these instrumentals offer something a little different, setting out as they do, a subtle protestation soundtrack for our worrying times."
Monolith Cocktail.

"The playing clearly comes from musicians who have a real mutual understanding, and at their best there is a feeling of what might be called disciplined spontaneity."
Penny Black Music.

"An extraordinary rock n’ roll gathering that sensationally exits out a psychedelic, electronic cosmically glowing atmosphere. It has a
fantastically avant-garde bluesy rock charm as well that deserves its rightful music respects."
Forksterocks.

"With their mind-ballooning space-rock of the highest order, The Loved Drones are on a fertile, exceedingly healthy mission which deserves to find a landing spot on any discerning receptacle."
Record Collector.

"The material takes in Krautrock, post-rock, electro and heavy rock, as well as more reflective sitar-strewn musical mantras to drift away to." Clearspot.